We all know that data centers require a lot of power. This power is needed by the IT industry to maintain the data center. Along with the power, there comes a tremendous amount of heat load that needs to be cooled. In this article, we will provide a closer view of the cooling methods that we use to keep your IT systems working.

Different methods are used to cool down the generated heat from servers, switches, and other IT equipment. The most common term used in data centers is CRAC (Computer Room Air Conditioning). CRAC refers to any cooling system on the data floor. But how does this type of “CRAC” work?

Let’s start with the basics.

A lot of misconceptions are there regarding the indirect adiabatic cooling system. People believe that in such cooling system the outside air is directly blown into the data floor. Well, this is not the case! Direct cooling systems can damage your IT equipment over time because of the substantial variation of the humidity and air pollution.

The primary airflow and secondary airflow are completely separated from each other because mixing them will create pollution and inconsistencies.

How does indirect adiabatic cooling work?

The indirect adiabatic cooling system uses a very basic cooling principle. It uses local weather conditions together with physical laws of the Mollier diagram to reach the required cooling capacity. The Mollier diagram is a graphic representation of the relationship between air temperature, moisture level, and related enthalpy.

The cooling unit consists of some essential components like housing, series of fans for each airflow, heat exchanger, ducting / compartments, electronics and water sprayers. The house provides room for all requirements such as the fans, heat exchanger, electronics, filters, etc. Depending on the design and place of the cooler, the housing provides various ways to install the required ducting or shafts towards and from the unit.

The fans are positioned in a way that it generates the required airflow to cool the IT-load. The two fans sections operate independently of the airflows to reach the necessary amount of cooling.

The heat exchanger also known as an enthalpy exchanger arranges the temperature/energy transfer between the primary and secondary airflow. The exchanger consists of a series of plates or tubes in which the two airflows travel through. Each airflow has its path through the exchanger during which the energy is transferred between the airflows. To reach the required amount of cooling the unit uses various fan speeds in both airflows to increase or decrease the amount of energy transferred between the two airflows. During warm days water is sprayed on the heat exchanger to increase the cooling capacity of the secondary airflow according to the physical laws of the Mollier diagram. The water also provides a better conductivity between the two airflows by optimizing the energy transfer. Most units require a basic water softening system to produce the required water. A water storage tank is required to store a certain amount of water in case of water outage from the main water connection.

All cooling units operate independently from each other to optimize the amount of cooling required for each part of the data floor.

Now let’s know the way in which airflows travel. We will start with the secondary airflow.

The secondary airflow starts its journey outside the datacenter. It depends on the ambient weather condition which of course varies during the year. Each cooling unit requires a specific amount of airflow according to the amount of load it needs to handle which regulates the fan speed of the unit. The ambient air required by the unit passes through series of filters to prevent dust, insects, etc. from entering the unit who have the potential of blocking the heat changer. 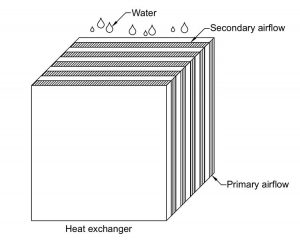 The Primary airflow starts as heated up exhaust air just leaving the server. This air is being sucked towards the cooling unit by the fans and travels through air filters to remove any dust, human hairs, etc. After the filter, the “hot” air enters the heat exchanger and starts to discharge its energy to the much colder secondary airflow and as a result, cools the primary airflow. Upon leaving the heat exchanger, the air becomes cool to a level, which is required by the SLA temperature of the data center. The unit controls the fan speed and water to regulate the required amount of heat discharge between the two airflows. The cooled air travels back again towards the data floor ready to begin its cycle again. It is a cyclic process.

There are basically two operating modes:

The indirect adiabatic cooler is known for its high energy efficiency reaching a cooling PUE (power unit effectiveness) of 1.05 at a single moment! Traditional cooling methods are lot less efficient and require a lot of maintenance.

We at datacenter.com care about the environment and believe that all small steps towards efficiency help to save energy requirements. The units itself are at an elementary level at this time, and this eliminates defects and the need of high-maintenance.

You are welcome to visit our Amsterdam data center facility. Contact our Sales team to arrange a tour.